I discovered a little piece of magic when, on an En Via tour, Stella – a weaver in Teotitlán – explained to us how she uses natural dyes in her tapetes (rugs), including indigo.

I could feel a little ripple of excitement pass through the group with the words “natural dyes” and as Stella’s husband brought out a small bowl made of calabash containing ash-covered rocks, hands eagerly reached out for a closer look.

But how do these ash-covered rocks – resembling something I might find in the bottom of my BBQ grill – somehow produce vibrant blues? And that same rock is responsible for the blue in my Levi’s jeans?  I was skeptical.

That was the start of my journey to understand the life of indigo.

And I have discovered that these seemingly plain rocks do indeed have a story to tell. The plant, Indigofera suffruticosa, also known as Añil, is one of the oldest dyes used for textiles and printing.

Throughout its long life, indigo has journeyed from India – its earliest major production center – to Europe, where it was popularized by the Greeks and Romans as a luxury product.  With the onset of the Spanish colonization of Latin America, the Spaniards promoted the production of indigo among their colonies and its production continues today, although to a lesser degree. Each year the state of Oaxaca produces about 100 kilograms of indigo.

The process of production is conserved in many places. In the town of Santiago Niltepec (on the coast of Oaxaca on the Isthmus of Tehuantepec), people pick and chop the wild plant and soak it in a fermentation bath for a minimum of twelve hours.  The plant decomposes and accumulates at the bottom of these baths, becoming a thick paste that is strained, resulting in a highly concentrated product.  The plant-based paste is then dried, solidifying into rock-like materials (these are the seemingly uninspiring rocks that I first encountered in Stella’s workspace).

It is then pulverized and transformed into a powder. In Oaxaca, traditionalists may use a metate (mortar and pestle) to grind the solidified plant material, others may choose a speedier method, such as a coffee grinder. It is then mixed with water and used as a dye.

To give you an idea of scope, it takes about 200 kg of plants to produce 1 kg of indigo dye.  Given this long, laborious process, indigo – along with the other natural dyes used by Stella’s family – is quite expensive.  But despite higher prices, it remains a sought after component, even today.

Denim is the premier example of indigo’s continued pre-eminence. While most denim today uses synthetic dyes, indigo remains a staple of Levi’s denim as proclaimed on their website: “INDIGO IS OUR BIRTHRIGHT.”  In fact, according to Wikipedia – the authority on just about everything – indigo “is the blue of blue jeans.”

This plant has had quite a journey.  With roots in ancient civilizations, it is conserved in the workspace of Oaxacan weavers like Stella, and graces the streets of the world in the form of denim. Indigo – a magical plant, indeed.

En Vía’s tours offer an opportunity to get an intimate insight into the lives and crafts of artisans and businesswomen in the communities around Oaxaca as well as to have the satisfaction of knowing your tour fee supports our program of interest-free loans and education. 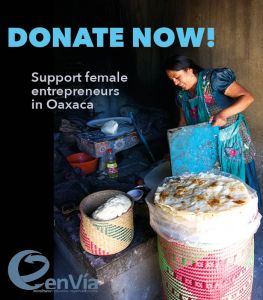